Pre-K is Good for Pennsylvania Business 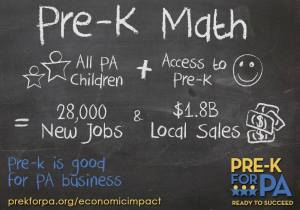 Pre-K for PA released a report prepared by ReadyNation/America’s Edge which shows the economic boost that prekindergarten investments can generate in the state economy.  For each dollar invested in pre-k in Pennsylvania, a total of $1.79 in economic activity is generated in the state.

Pre-K for PA is an issue campaign in support of access to high-quality pre-k for every 3- and 4-year-old in Pennsylvania.  Its founding organizational members are key early childhood and children’s organizations (Pennsylvania Partnerships for Children, Public Citizens for Children and Youth, the Pennsylvania Head Start Association, PennAEYC, PAEYC, and DVAEYC) and supporters of pre-k investments (Fight Crime: Invest in Kids, The United Way of Greater Philadelphia and Southern New Jersey, Mission: Readiness, and the Economy League of Greater Philadelphia).

This report is one in a series of reports by ReadyNation I co-authored which document the potential economic impact of investments in early learning.

Edited to add:  Press coverage of the report: